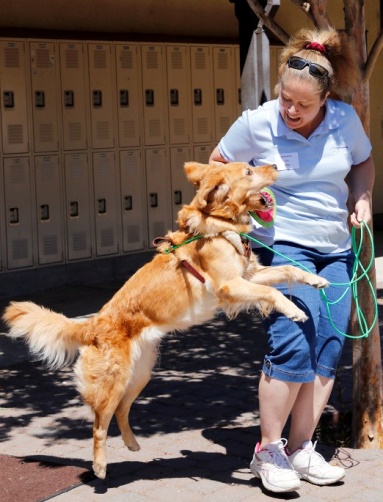 Jennie was introduced to K9 Nose Work® in 2009, at the first Intro to Nose Work workshop held in Northern California. Before Nose Work she did not appreciate her Golden Retriever’s intense desire to hunt critters, so was instantly hooked on the training as she channeled her dog’s instincts into a healthy and rewarding outlet for both of them. Jennie and Karlie went on to compete in the first 3 NACSW™ National Invitationals and qualified for the 2017 National Invitational. They also competed in the first Elite Division trial in Santa Rosa, CA in 2015.  Jennie never dreamed that she and Karlie would go so far and grow so much as a team.

Jennie’s second Golden, Abbie started playing Nose Work games as a puppy and Jennie very quickly learned the value of this game to build self-confidence in puppies as well as adult dogs. Jennie and Abbie went on to earn their ELT2 and also met the requirements for the 2017 National Invitational in MA.

Jennie has started K9 Nose Work competitions with her Labrador Retriever, Emerson and is enjoying the process of applying all that she has learned over the past 10 years to the foundation training of her new Golden puppy, Lainey.

Jennie’s love of the game and the benefits it has for dogs and owners alike, motivated her to achieve CNWI status in May, 2011.  She currently teaches several K9 Nose Work® classes each week and also offers a number of drop-in classes.  Jennie works as part of the NACSW™ Trial Department and also oversees memberships and the ORT Team.  Jennie has been a Certifying Official for the NACSW™ since 2012 (approved for all levels), is a Supervising Certifying Official, and a Trial Judge.  Jennie worked as a Customer Service Manager for 19 years, but decided to leave the corporate world to pursue her true love of working full-time with dogs and their humans.